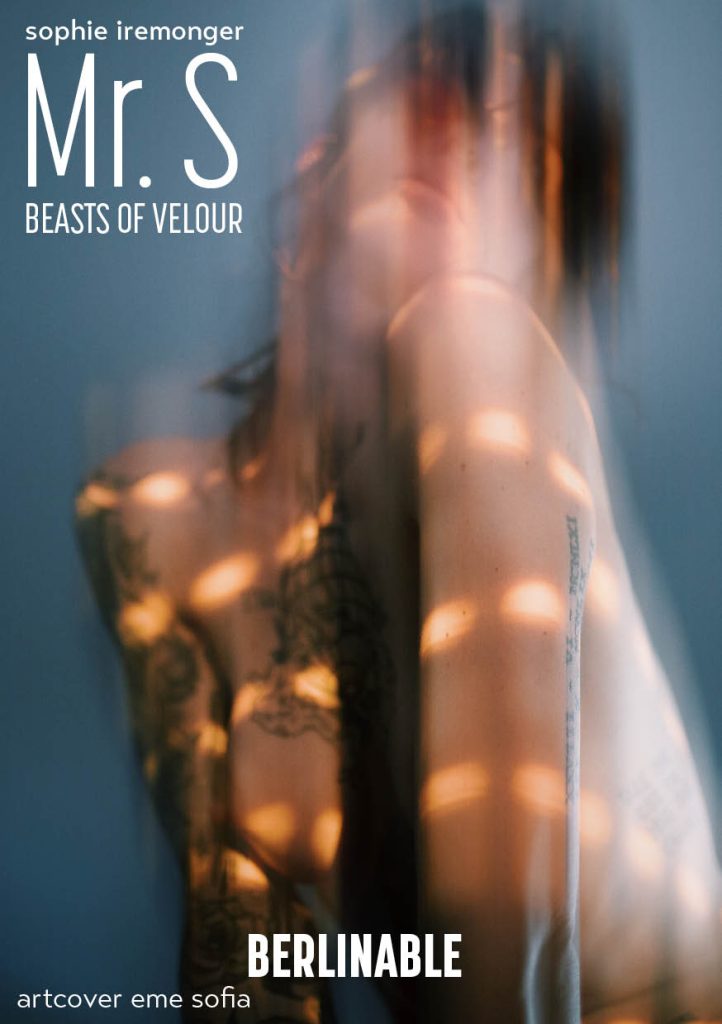 Standing in the aisle at Rossmans. Walking out, dazed, holding products meant for teens. I just went to a sex workers’ meetup for the first time and forgot to bring 100 female condoms. My contribution. They’ve been sitting in a suitcase under my bed for 100 years. Give it to me, give it to me like that. I am not thinking of him. Though he has been sending me… pictures. So, I am thinking of him. I’m wearing a purple velour tiger-print fake fur.

Hermannplatz: standing facing the meridian strip. Nefarious characters sell rotting vegetables. There’s an Asia noodle, a falafel van. It’s the king of cobbled meridian strips, has a portable lavatory. Ah, him. How did I feel about that meeting? Good. Some of those whores are pretty hard boiled. They have a look, a 10000-yard stare, I can do without cultivating, as I’m already crazy bitch enough according to 100% of random guys who I’ve fucked on Tinder once and never ever want to see again. No more freebies.

Yesterday’s sausage. Yesterday’s sausage… Speak of the devil… Who is that? I see this guy limping and lurching, a really badly dressed dude wearing a sleazy coat with a greasy brown fake fur collar that looks like it has been used to clean a kebab vent. And a Hawaiian shirt. In October. The vibe is bankrupt Caribbean vampire.

Kind of looks like what’s-his-name… but. This dude looks much worse. He is wearing one of those giant plastic foot cradles that you see on unfortunates with busted feet. OMG it IS what’s-his-name. He is lurching across the road in the opposite direction as I’m crossing, he doesn’t see me… and what the fuck has happened to him? He looks one time, two times, three times homeless. Which is very interesting compared to his usual presentation of metrosexual technicolour synth wizard.

I am proud to say, or maybe not so proud, maybe brag humbling and not humble bragging, that I have NEVER fucked any man, boy or child, who is not a very talented (debatable?) narcissistic (true) tall (always) musician. Well, apart from that one guy on the ferry who tasted like Tate and Lyle. Whose friends called him JOHNO. Oh, yeah… There’s also all the ones who suck my feet for cold hard cash. Never enough because I get carried away and end up fucking them for free. Yes, I know: sad and deranged.

As I reach the other side a split second of deductive reasoning follows: he is weakened, my time is now. So, I turn around, “HEY, S! Hey S!” I’m shouting now. “Oh S, oh S!’

Yesterday’s sausage: I never quite got around to finishing him off. More of which later, when I elucidate the fine reasoning behind never going back for sloppy seconds of your favourite sausage. We hooked up once… time elapsed dramatically, an entire ice age. I was practically a new species by the time he started sending me THOSE pictures.

Anyhow, on a good day Mr. S is a stunning piece of work. Built along the classic lines of my favourite ride, the very skinny musician. He’s rangy 45 at least, keeps his age a secret. Cagey Cancerian. Mr. S Has style, knows how to work a crowd, and at the heart of it is basically a jock. His creative credentials are built atop a mainframe of pure misogyny. But in technicolour. So it’s pretty.

Sometimes there’s make-up. He often looks like whatever woman he’s fucking at the time has simply thrown makeup at his face. Above all what attracts me to him is his burnt-out tenderness, a kind of bitter tenderness, the tenderness of an inflamed scar, of someone whose been hurt very badly. It emanates from him like a mist. Once upon a time, Mr. S was a boy, a soft vulnerable boy, with knotty hands holding Lego. Then, he discovered women. Or women discovered him. It was inevitable. And he hasn’t had a peaceful moment since, or ever been single. Women women women, pulling him apart in a million different directions. They grasp at him ceaselessly, carnivorously, little girls stick to him like candy. It’s this smell he gives off, a cursed charm. Nothing slows down MR S. I hope he never sees this… His ego is already pretty tumescent. Stop reading now, Mr. S. It’s only going to get worse! Sometimes I feel sorry for the women, being treated like the handle of a toilet door. But mostly I feel sorry for myself.

So… So, I’m yelling at him and he’s on the other side of the road. He turns and looks pretty deadpan, his mouth hitches up a bit on one side. An old petticoat. I think it’s a smile, he’s showing me the edges. It could just be a reaction to his meds. He turns and begins making “call me” signs with his hands, then retraces his steps across the road, dragging his crippled foot. Then he’s walking over here with his plastic foot cradle, for me, me alone, and it is one of the most romantic things I’ve ever seen, this pushing middle age, slightly balding womaniser limping through traffic.

I’m a thirsty Cactus making a four-course meal from mist.

“Hi,” his voice is very deep, resonant. Soft about the edges like a paw, and like a paw, has something sharp inside Hiii… Unlike JB, that warm and decent boy, with big high balls full of young sunshine, Mr. S is not likeable in any way.

Neither is he noble, dutiful or gallant. He has a dull obsidian sparkle like the floor of a disco at four am. Not bedroom eyes. Darkroom eyes. He is a pure sensualist man-baby. If you got hit by a car, he would slither away after looking up your dress, taking a photo and touching himself a bit. That’s not to say he wouldn’t cry. And he’s really, really, really afraid of being alone… This I know. I feel it. I’m always keeping score. Like a velociraptor testing a fence.

So, “hi”. “Hi, S,” I feel pretty chill, which is good because last time we met I made an ass of myself and the time before that I fell in love with him. And the time before that I was a baby bird in his claws. Little do I know I’m going to make the penultimate fool of myself very soon. Stay tuned! So yes, we give each other the old chat. He’s in his cheap fur and I’m in mine. He goes crazy for my purple fur feeling it all over. His plastic shoe, my cheap fur, his cheap fur. He wants to put me on. …